Torqqe has the privilege of putting into productive use a building originally built in 1946. Commissioned as an oil field supply warehouse the unique character and strength of this building serves as a cornerstone for Torqqe Performance and our purpose.

National Oilwell Co. was one of a half dozen oilfield supply companies with blanket coverage of Texas oilfields in the first half of the 20th century. Competitors active in West Texas included United, Republic, and Mid-Continent. These were the oilfield convenience stores of their era, generally located within a few blocks of each other along a railroad spur. These structures had one unusual feature in common; all of them had a half second story dedicated to living spaces for their employees. This was done because housing was often in short supply in oilfield boomtowns, and because these stores had to stay open around the clock, since oil drilling rigs ran the same. This structure was built in 1944 to serve as the National Oilwell Supply House at Midkiff, Texas. Midkiff, now nearly a ghost town about 35 miles South, South-East of Midland, was once a very busy place. The current owner found the structure there in 2012 as part of a systematic search of old West Texas oilfield boom towns for buildings of this type, regarding which there is one other here in the complex. Before Google Street View was invented, these searches required long drives across isolated parts of Texas. These drives, over a period of 30+ years, yielded the discovery of many interesting abandoned industrial structures. In some cases, including this one, it was love at first sight.

On the subject of driving, and love, it should be remembered that the demand for motor fuel, for cars, trains and planes, is what has driven the success of the Texas oil industry since the dawn of the 20th century. But first, there was a peculiar detour of automotive history; the fastest sprint car in the world in 1905 was steam powered. In 1904 the White Sewing Machine Company of Cleveland, Ohio built a steam works racing car named the “White Flier” but more commonly known as the “Whistling Billy” for the howl from its burners when racing. The car had a 20 horsepower steam engine, with a water boiler fueled by kerosene. This car was transported by rail to various auto races across the country, including a race held at Dallas Fair Park at the Texas State Fair in the fall of 1905. Pictured here is a color tinted postcard photo of the car, winning that race. 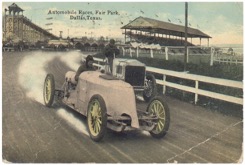 Its world speed record, of nearly 75 mph, had just been established at a July 4, 1905 race held at Morris Park racetrack in Westchester County, New York. The car’s driver, Webb Jay, bested a competing driver named Louis Chevrolet, who was driving a Fiat 90 HP car (verify). This was a 5.5 mile race, at which Webb made one mile in 49 3/5 seconds, beating Chevrolet’s record of 52 1/5 seconds. The White Flier was able to win this race because its direct drive motor enabled far higher torque, and thus much faster acceleration from a standing start, than the best competing Fiat model. On Youtube you can see an episode of Jay Leno’s Garage Show, where he gives a mechanical explanation and demonstration of his White Steamer, taking it out for a spin. The problem dooming this line of automotive innovation was lack of driving range, and difficulty of operation. Forever after 1905, the fastest car in the world would be gasoline-powered.

Texans were fully swept up in the national mania for cars and car racing which followed. The first races were held on beaches, since there were no long paved roads at the time.

From 1909 to 1914 the Galveston Cotton Carnival featured a wildly popular auto race, on a track which ran 2.5 miles down Galveston beach, enabling a 5 mile circuit race, or if repeated, a longer race. The races were held a low tide, after a team of horses dragged railroad rails broadside down the beach, to smooth the racecourse and clear out debris accumulated from depositions of flotsam at high tide.  (say one more sentence, what were winning models and speeds). In 1915, the beach was abandoned in favor of a specially designed half mile oval dirt track. From Galveston, car racing spread across Texas. Pictured here is the starting lineup at a 30 mile dirt track race held in 1921 at the West Texas Fairground at Abilene, Texas. By the late 1920s, Texas “moonrunners” transporting liquor illegally manufactured during the Prohibition era (“moonshine”) had come to value fast cars, in order to be able to outrun law enforcement officers. From this need arose a new technology, of modifying stock (standard manufacturer) cars in various hidden ways to improve their speed. Their drivers were engaged in a game of cat and mouse with Federal ATF agents seeking to shut down hidden distilleries and delivery runs. By the 1930s Americans had become enchanted with speed, and streamlining to increase it. In 1937 a fourteen year old Texan named Carroll Shelby walked out of a DPS office with his first driver’s license, and on his inaugural licensed drive that day was pulled over by a Dallas police officer for exceeding 80 mph on East Pike Drive. “It was the best street”, he would later remember. 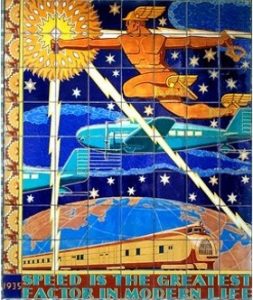 The 1940s were difficult times for automobile enthusiasts in Texas, because the production of new cars for civilian use was suspended after the bombing of Pearl Harbor in 1941. The national supply of gasoline and rubber tires for existing cars was severely rationed for the duration of the war, and pleasure driving was considered frivolous and unpatriotic. Both Chevrolet and Ford released their first post-war styles in 1949, with completely different appearances from the prewar look, and customers came to the showrooms in droves. These two companies together produced 2.12 million automobiles in 1949, compared with 1.26 million the year before. America went car crazy in 1949; the newest advertising jingle was “See the USA in your Chevrolet”, soon made famous by Dinah Shore in commercials now immortalized on Youtube. You could not really see the USA easily by car in 1949, because the Interstate Highway system had not yet even been proposed. 1949 saw the organization of NASCAR (National Association for Stock Car Automobile Racing), a group devoted to the “hacking” of standard manufacturers’ cars to boost their speed far above their design.

Starting as an amateur, Carroll Shelby won his first Texas car race in 1952, driving an MG-TC winning the production car class. During the 1950s he raced in a variety of sports cars, including models by Ferrari, Maserati, Jaguar and Aston-Martin. 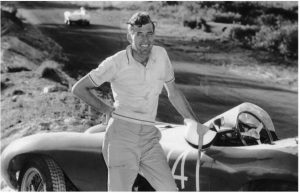 He is pictured here in 1956 with an 857S Ferrari. The pinnacle of his race car driving career came in 1959 when he won the crown jewel of international sports car racing, the 24 hours of Le Mans, driving an Aston Martin DBR1. He was popping nitroglycerine pills while driving, to address the pain of a leaking heart valve, and his doctors said it was quit racing or die. Shelby retired from driving in 1960, and turned his attention to designing and building an American sports car, which he named the Cobra and proposed to the Ford Motor Company for manufacturing. The car was built in 1962 with a Ford 260 cubic inch engine, commencing a partnership that would last to the end of the decade;

Shelby is pictured here in the driver’s seat. Ford next asked him to overhaul their “Mustang” model to remake it into a sports car with a performance image. In 1965 they released the Shelby Mustang GT350, which that year bested the Corvette Stingray, Jaguar XKE, Sunbeam Tiger and several Ferrari models at that year’s Sports Car Club of America’s B production class race. In 1966 Shelby oversaw the Ford Motor team to victory at the Le Mans with his GT40 design, in a race immortalized in the 2019 movie “Ford vs. Ferrari.” Ford kept the Shelby Mustang in production through the 1969 model year, and in hindsight it is seen as one of the icons of that decade. Other iconic performance stock cars of that decade were the 1969 HEMI Roadrunner, AC Cobra and 1967 427 Corvette. Another Texan rose to racing prominence in the 1960s. A.J. Foyt grew up in a rough area of Houston called the Heights, where at age 5 his father built him a lawnmower powered racer. Foyt was hooked, and went on to win the Indianapolis 500 four times, first in 1964 driving the Sheraton-Thompson Special Indy Roadster he is pictured with here. 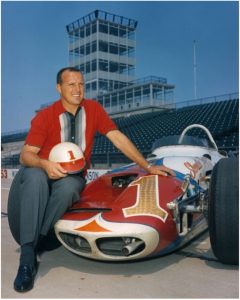 The 1970s were not good times for automobiles, or for speed. The Arab oil embargo of 1973 exposed America to its dependence on imported oil. Gasoline shortages erupted nationwide, and speed limits on the interstate highway system were lowered to 55 mph to conserve fuel. Auto manufacturers downsized their models, ending the “muscle car” era which had flourished during the 1960s. By the 1980s the “oil shock” was wearing off, and a new generation of performance cars became prominent, including the Buick Grand National, Shelby Omni GLHS and Ferrari 288 GTO in the 1980s, and the Corvette ZR1, Dodge Viper and Toyota Supra in the 1990s. Performance cars newly popular in the 2000s include the Porsche Carrera GT and Saleen S7.

The above look into the history of our Midkiff facility and racing in Texas was written by and used with the permission of William Osborn, the passionate and dedicated owner of Texas Compound LLC. For more very interesting bits of history see the Texas Compound website.

Menu
Book a Tour
© 2019 - 2021 Torqqe Performance. All rights reserved.
All product and company names are trademarks™ or registered® trademarks of their respective holders; use of them does not imply any affiliation with or endorsement by them.